Farmland prices have increased for the first time since 2013, driven by by strong commodity prices and low interest rates. Surveys suggest the outlook is very bright

Iowa farmland prices increased approximately 8% over the past six months through March 2021, as measured by the Iowa Chapter of the Realtors Land Institute (“RLI Iowa”) March survey. The report cited higher commodity prices and government support payments as drivers of the price increase. Land prices had been flattish for the twelve months preceding September 2020.

High quality Iowa cropland is now above $10,000 per acre. The survey recorded high quality cropland price of $10,086 per acre, up from $9,379 in September 2020. All nine reporting districts reported mid to high single digit increases with values rising for all quality and use types. 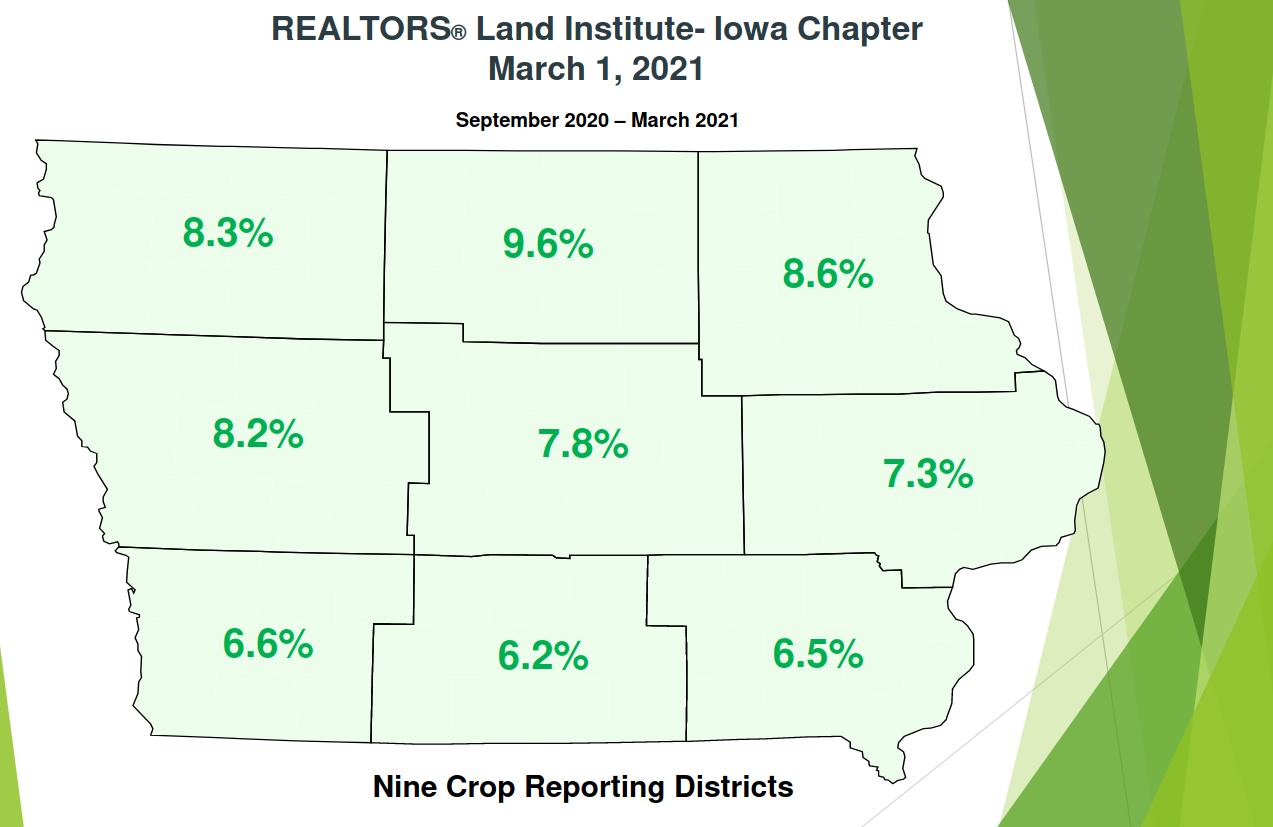 The survey participants’ outlook is bullish. 93% of the respondents expect farm land values to increase over the coming five years, with 43% of expecting at least 10% increase. 5% expect a flattish outlook, while only 2% expect values to decline.

Farmland available for sale is lower than in the recent past, and it is a driver of higher prices. 65% of respondents stated that the number of farms for sale is lower in their area versus one year ago, while 22% stated it is similar.

Participants ranked the reasons for higher prices. Concerns regarding economic inflation was at the bottom of the list:

The median expected return for cropland is about 3%, which is above nominal yields. More interesting is the Conservation Reserve Program (CRP), a land conservation program that pays farmers to convert and remove environmentally sensitive farmland for a duration of 10-15 years, sees a median return of about 4% (above the expected return of farming and cash deposit rates). This could continue to put some pressure on new crop supply.

Chicago Fed Outlook For Farmland Is "Rosiest In Years"

The Chicago Federal Reserve’s February 2021 AgLetter confirms the positive outlook. According to the survey results, the agricultural outlook seemed to be the "rosiest in years". It noted a +6% increase in value January 2021 over January 2020 in the Seventh District (Illinois, Indiana, Iowa, Michigan and Wisconsin). The survey respondents are 137 agricultural bankers in the region.

"The District also experienced positive changes in its agricultural credit conditions during the fourth quarter of 2020. In the final quarter of 2020, repayment rates for non-real-estate farm loans were higher than a year ago, and loan renewals and extensions were lower than a year earlier. Neither of these farm credit indicators had recorded year-over-year improvements since the third quarter of 2013."

Credit conditions continue to improve. The Chicago Fed’s survey noted that loans categorized as having repayment problems fell to 4.3% in 4Q 2020, the lowest level since 2014. As of January 1, 2021, the average interest rates for farm operating loans was 4.5% and agricultural real estate loans was 4.1% — the lowest levels in the history of the survey. While interest rates moved down, the vast majority of banks did not change their credit standards for farm loans. 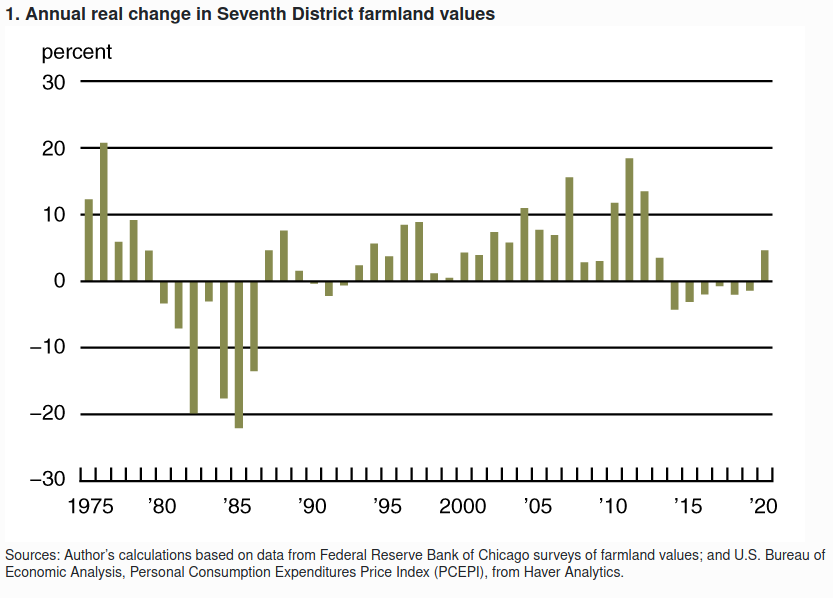 As we wrote last month, farmland prices benefit when farm net income rises. When buyers have more cash to spend they can pay more. The prices of corn and soybeans have increased by ~70% since mid-2020, and the expected net income should increase by even more for many farmers. 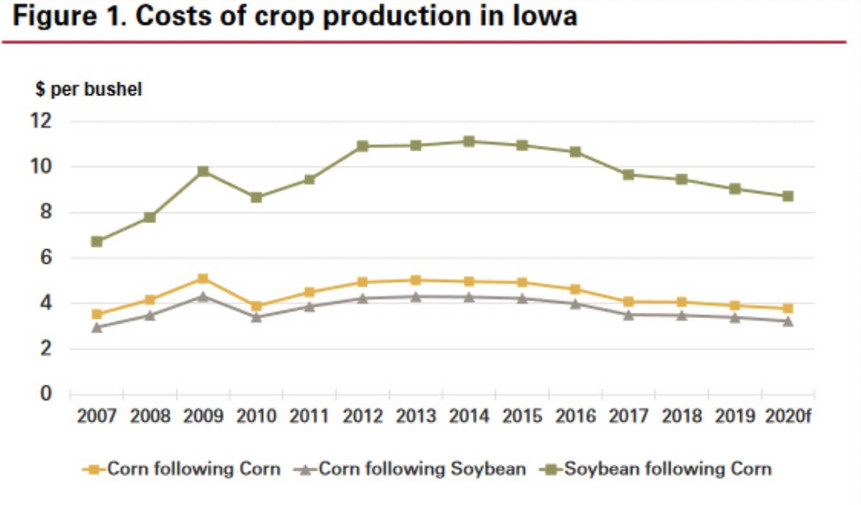 It is important to keep in mind that other costs tend to rise during a reflationary commodity cycle. Fertilizers, machinery, seeds and the rest of the value chain tend to see costs go up too. We are seeing strong price increases in used tractors, combines, planters and applicators. Used machinery prices for sale and auction are reaching prior 2012 peak levels in many instances.

Benefit As The Trend Rotates From Financial Assets To Real Assets

Farmland is a real asset, and over the long-term a healthy mix of real and financial assets balances your portfolio. During a reflationary cycle such as this one (increasing inflation) the market adjusts and outperformance tends to rotate from financial assets to real assets.

Interest rates and inflation have been historical drivers of the trend rotation. Bonds have experienced a 40+ year bull market. There is an old saying, the longer and stronger the trend, the more violent the break when it finally does occur. This is not a call that the bond trend will break here and now... but when it does buckle up.

We remain very positive on the agriculture cycle and believe that we are entering a long-term commodities bull market. Farmland is one way that you can gain exposure to positive cyclical tailwinds. 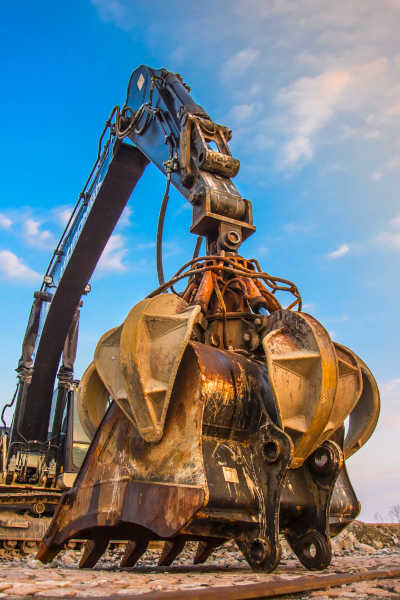